Heat treating (or heat treatment) is a group of industrial, thermal and metalworking processes used to alter the physical, and sometimes chemical, properties of a material. The most common application is metallurgical. Heat treatments are also used in the manufacture of many other materials, such as glass. Heat treatment involves the use of heating or chilling, normally to extreme temperatures, to achieve the desired result such as hardening or softening of a material. Heat treatment techniques include annealing, case hardening, precipitation strengthening, tempering, carburizing, normalizing and quenching. Although the term heat treatment applies only to processes where the heating and cooling are done for the specific purpose of altering properties intentionally, heating and cooling often occur incidentally during other manufacturing processes such as hot forming or welding.

Metallic materials consist of a microstructure of small crystals called "grains" or crystallites. The nature of the grains (i.e. grain size and composition) is one of the most effective factors that can determine the overall mechanical behavior of the metal. Heat treatment provides an efficient way to manipulate the properties of the metal by controlling the rate of diffusion and the rate of cooling within the microstructure. Heat treating is often used to alter the mechanical properties of a metallic alloy, manipulating properties such as the hardness, strength, toughness,[1] ductility, and elasticity.

There are two mechanisms that may change an alloy's properties during heat treatment: the formation of martensite causes the crystals to deform intrinsically, and the diffusion mechanism causes changes in the homogeneity of the alloy.[2]

The crystal structure consists of atoms that are grouped in a very specific arrangement, called a lattice. In most elements, this order will rearrange itself, depending on conditions like temperature and pressure. This rearrangement called allotropy or polymorphism, may occur several times, at many different temperatures for a particular metal. In alloys, this rearrangement may cause an element that will not normally dissolve into the base metal to suddenly become soluble, while a reversal of the allotropy will make the elements either partially or completely insoluble.[3]

When in the soluble state, the process of diffusion causes the atoms of the dissolved element to spread out, attempting to form a homogenous distribution within the crystals of the base metal. If the alloy is cooled to an insoluble state, the atoms of the dissolved constituents (solutes) may migrate out of the solution. This type of diffusion, called precipitation, leads to nucleation, where the migrating atoms group together at the grain-boundaries. This forms a microstructure generally consisting of two or more distinct phases.[4] For instance, steel that has been heated above the austenizing temperature (red to orange-hot, or around 1,500 °F (820 °C) to 1,600 °F (870 °C) depending on carbon content), and then cooled slowly, forms a laminated structure composed of alternating layers of ferrite and cementite, becoming soft pearlite.[5] After heating the steel to the austenite phase and then quenching it in water, the microstructure will be in the martensitic phase. This is due to the fact that the steel will change from the austenite phase to the martensite phase after quenching. Some pearlite or ferrite may be present if the quench did not rapidly cool off all the steel.[4]

Unlike iron-based alloys, most heat-treatable alloys do not experience a ferrite transformation. In these alloys, the nucleation at the grain-boundaries often reinforces the structure of the crystal matrix. These metals harden by precipitation. Typically a slow process, depending on temperature, this is often referred to as "age hardening".[6]

Many metals and non-metals exhibit a martensite transformation when cooled quickly (with external media like oil, polymer, water, etc.). When a metal is cooled very quickly, the insoluble atoms may not be able to migrate out of the solution in time. This is called a "diffusionless transformation." When the crystal matrix changes to its low-temperature arrangement, the atoms of the solute become trapped within the lattice. The trapped atoms prevent the crystal matrix from completely changing into its low-temperature allotrope, creating shearing stresses within the lattice. When some alloys are cooled quickly, such as steel, the martensite transformation hardens the metal, while in others, like aluminum, the alloy becomes softer.[7][8] 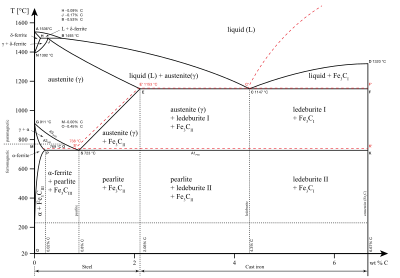 The specific composition of an alloy system will usually have a great effect on the results of heat treating. If the percentage of each constituent is just right, the alloy will form a single, continuous microstructure upon cooling. Such a mixture is said to be eutectoid. However, If the percentage of the solutes varies from the eutectoid mixture, two or more different microstructures will usually form simultaneously. A hypo eutectoid solution contains less of the solute than the eutectoid mix, while a hypereutectoid solution contains more.[9]

A eutectoid alloy is similar, but the phase change occurs, not from a liquid, but from a solid solution. Upon cooling a eutectoid alloy from the solution temperature, the constituents will separate into different crystal phases, forming a single microstructure. A eutectoid steel, for example, contains 0.77% carbon. Upon cooling slowly, the solution of iron and carbon (a single phase called austenite) will separate into platelets of the phases ferrite and cementite. This forms a layered microstructure called pearlite.

Since pearlite is harder than iron, the degree of softness achievable is typically limited to that produced by the pearlite. Similarly, the hardenability is limited by the continuous martensitic microstructure formed when cooled very fast.[10]

Similarly, a hypoeutectoid alloy has two critical temperatures, called " arrests." Between these two temperatures, the alloy will exist partly as the solution and partly as a separate crystallizing phase, called the "pro eutectoid phase." These two temperatures are called the upper (A3) and lower (A1) transformation temperatures. As the solution cools from the upper transformation temperature toward an insoluble state, the excess base metal will often be forced to "crystallize-out," becoming the pro eutectoid. This will occur until the remaining concentration of solutes reaches the eutectoid level, which will then crystallize as a separate microstructure.